Visit for the best HD travel videos in the world.

A classic beauty in Midtown East, The Waldorf Astoria is the epitome of a New York City luxury hotel. With a storied past and film setworthy decor, it is considered one of the finest examples of Art Deco architecture in Manhattan. The Waldorf has held a steadfast reputation for opulence and elegance since 1931. An iconic New York City landmark, The Waldorf caters to travelers seeking a rarefied New York hotel experience.

Occupying an entire New York City block on Park Avenue, The Waldorf is considered one of the very first of the so-called grand hotels. Managed by hotelier Conrad N. Hilton since 1949 and purchased by Hilton Corp in 1977, The Waldorf houses 1,416 guest rooms, including 303 suites, no two of which are the same. The Concierge level affords guest access to the Astoria Lounge for Complimentary Continental breakfast and privileged access to the Guerlain Spa and Fitness Center. Suite accommodations range from Mini Suites to Luxury Suites, which overlook Park Avenue and boast entry foyers and separate boudoirs. All rooms and suites have antique furniture with Art Deco flair and are decorated in mauve with floral printed accents. Flat Screen televisions and superior bath products come in all rooms. The formidable lobby of The Waldorf, with gold accents and multiple chandeliers, features a second-story terrace where guests can catch a glimpse of Cole Porters piano. One of the most sophisticated New York City hotels, The Waldorf calls for formal dress code. Casual clothing such as t-shirts, faded jeans and baseball hats are not suggested.

Three high-end restaurants are located at The Waldorf. Peacock Alley, in the main lobby, has a bar, lounge and private salon area serving a la carte lunch, small plates and classic dinner entrées, and Sunday brunch. The hotels Bull & Bear Steakhouse, a well-known New York stalwart, serves signature chops and seafood with a selection of Prime steaks and natural grown beef from Dakota Farms. And is open for dinner. Oscars Brasserie, an option for breakfast, lunch, serves classics, like eggs Benedict, and the iconic Waldorf Salad.

The on-site, 14,000-square-foot Guerlain Spa opened in September 2008. Guests can relax or rejuvenate with massage, a facial or body treatment, including the Body Polish and 5-Senses Hydrotherapy. The spa also has a personal training studio, with personal training by Serious Strength. A larger gym is located on the fifth floor of the hotel; use it for $15 per day. It features the latest Precor cardio equipment, with personal televisions, plus weights and exercise balls.

The Waldorf is conveniently located close to Fifth Avenue, home to world-class shopping and the finest New York City museums. The concierge in the main lobby can arrange for theater and museum tickets or sightseeing tours and can provide expert restaurant recommendations.

search content About Waldorf Astoria Nyc Are from Wikipedia

If you have any questions about Waldorf Astoria Nyc Please let us know, all your questions or suggestions will help us improve in the following articles! 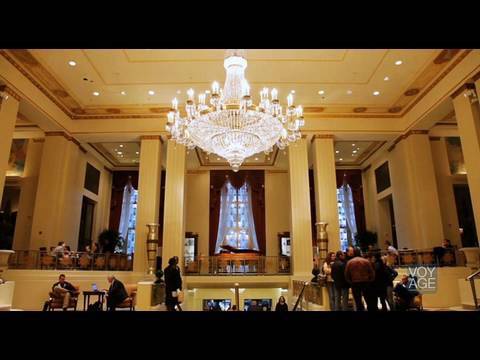 Channels Travel Magazine spent a lot of time and effort on complete video with duration 00:03:06, friends please share video to {rate | thanks | support the author.